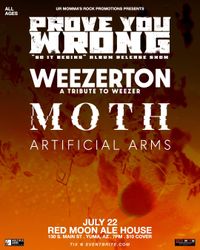 May 2022 - Prove You Wrong has just announced a brand new studio release named “Come On Baby.” The track captures the intensity of hard rock with a stunning mid-tempo vibe that’s energetic, yet also melodic. The song features steady, powerful drums that echo like they’ve been recorded in the center of a stadium: the who song captures that arena rock vibe that has an 80s twist to it. Even the unique solo, with some pitch-shifting action adding a special flair to it, has a throwback twist. However, there is also a more modern edge to the mix, which gives the song a crisp and refreshing vibe. This song is a quintessential rock number with a timeless energy to it. Each element in the song is thoroughly well-crafted, from the creamy guitar sound, down to the amazing edge of the vocal delivery, soaring on top of the mix.

“Come On Baby” is highly recommended to fans of artists as diverse as Def Leppard, Bon Jovi, Foo Fighters, Royal Blood, Greta Van Fleet or Cheap Trick, only to mention a few.

Get Out Out Of My Head